You know it's good for you. Even before the scientists and the activists and the sustainability hawks started in on you, it was like exercise and flossing. You know what I'm talking about. Composting.

Last summer, the local Town of North Hempstead here in Long Island offered a partly subsidized composter. The idea caused a bit of a stir in the household, and Ann wrote a story for Patch about how she warmed to the idea.

While we weren't excited about sitting in on a co-op class in order to get it (actually Ann endured this indignity), I heard my late Mom's voice cheering us on. Then there was the matter of the coffee grinds; we grind our own and it just seemed right that the yard should benefit from our largess -- especially a corner near the back porch which received a lot of sun, which the vines there enjoy, but has poor soil conditions.

There were other deserving spoils deep from the forgotten corners of the fridge: Emily's leftovers from Sheesh a few months ago, some of my spinach that had started to flex its muscles, and some of Ann's sausage that was gone but she was too much in mourning to let it go. And more. [Note: Norm, a much less satisfied co-composter, reminds me that in fact sausage can't be part of the secret sauce.]

So we embarked on the adventure with optimism, and for some, skepticism. But I was determined to see it through. We didn't have much snow this year, so I didn't have to dig the composter out of snow banks more than once, but there were plenty of cold New York nights and mornings when carrying the day's spoils [sic] out didn't particularly invigorate.

In the kitchen we sprang for a pail that filtered the odors, since Ann was worried that the odor would interfere with her favorite morning smell - burned bagel with butter.

That worked well, and the pail is easy to clean, though when our CSA Golden Earthworm subscription is in season, there are many more trips from the kitchen to the composter.

Then came the issue of what to put in it. We followed the guidelines from the class and elsewhere, which I won't repeat here, except to emphasize two things (1) do the obvious and accelerate decay by cutting up large vegetables, even if they are unsavory to look at; (2) yes, shredded newsprint does get composted, though it seems to take perhaps twice as long as leaves or vegetable cuttings do.

I started the process with some back yard soil and leaves (we have those in abundance pretty much 7 months of the year in these parts).

Last weekend, I emptied the very full contents of the composter and was quite pleased with myself, as the photos below demonstrate. 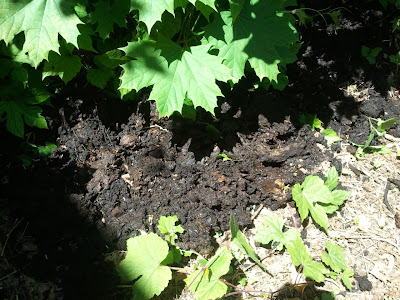 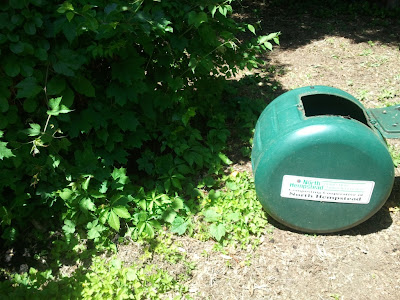 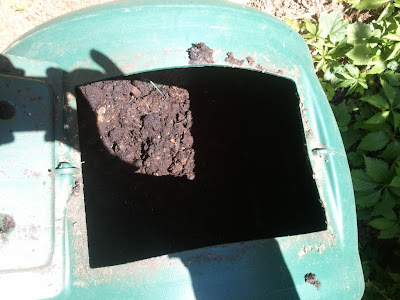 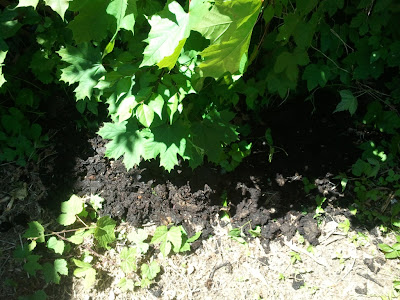 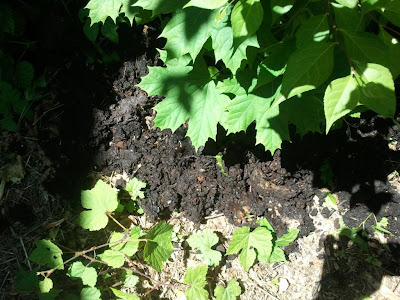